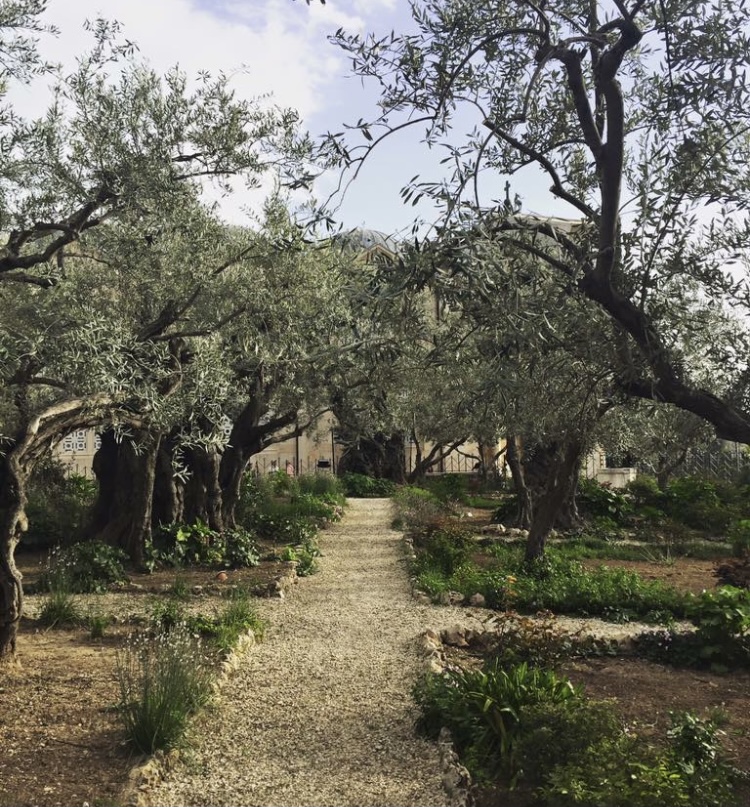 I had the amazing opportunity to travel to Israel and Jordan over spring break my sophomore year of college. I had just declared a major in the ministry department the previous fall and felt blessed that my time in those countries could be spent as a student, as a lover of learning in general, and first and foremost, as a follower of God.

The pilgrimage was a whirlwind: it was my first time out of the country (or even on a plane!), we were moving from one place to the next fairly quickly, the homework was endless, and I experienced a near constant state of being in awe.

I learned early on that there are a LOT of churches and monuments all over the holy land serving  as markers for something: the potential location of a miraculous act, the rumored birthplace of Jesus, an Old Testament battle scene, even a huge church built around a hole in the ground where Jesus’ cross may have been placed.

On one of our last days, we walked all around Jerusalem and found ourselves in the Garden of Gethsemane. As a group, we sat and reflected on Jesus’ time of prayer there the night He was betrayed. After a few minutes, my fellow travelers stood up slowly and made their way back into the beautiful church that was built on sight. I, however, couldn’t get up.  It was as if my heart wouldn’t let my legs function. I kept staring at the olive trees that were so old they could have been there to hear the very prayers of Jesus. So I sat by myself, shedding tears.

It was outside among the trees, not in the church building, where I could see scripture coming to life in front of me. Jesus and the disciples making the trip from the Passover meal to the garden. Jesus’ plea for the disciples to stay awake only to find them snoring over and over. The Son of God with His knees in the ground, blood and sweat dripping off His face, crying out in prayer. The voices of betrayal getting closer and closer. And it hit me.

Jesus, even in the midst of experiencing the very real human emotion of anguish, was obedient to God’s will with me in mind. My family. My friends. Ever human being who has ever lived and ever will live.

Instead, He was obedient, even in His hurting humanity, to the will of the Father. He saw past the coming abandonment and excruciating suffering to the other side: to redeemed relationships and a Kingdom-of-God community. He saw lives that would be made new through His sacrifice. He saw sin and death being crushed and forgiveness and restoration spreading like wildfire.

You do not have to be halfway around the world looking at ancient olive trees for these truths to penetrate your heart. Sit still wherever you are right now, rest in God’s love, and give thanks this holy week for Jesus’ selfless garden prayer.