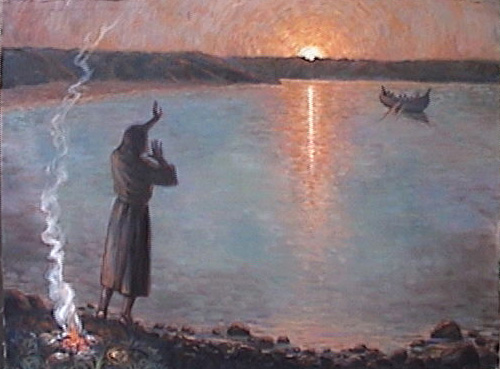 Only a few short months after we got married, I traveled with our church to the Dominican Republic without Matt. To say it was difficult to be apart (with next to no contact) for so long is an understatement. Don’t get me wrong, I enjoyed the trip and gained some beautiful friendships while gone. I also missed my new husband so much that the week-and-a-half-ish without him felt more like a month and a half! As our team neared family members waiting for us at the airport, all I wanted to do was run and fall into Matt’s arms. Instead, I maintained a (fast) walking pace out of fear of what those around me would think.

In the weeks following Easter Sunday, I like to reflect on Jesus’ encounters before His ascension. One of my favorites takes place in John 21. A group of disciples, including Simon Peter, decided to leave their locked rooms to go fishing. Many of them had been fishermen prior to being called and likely found comfort in returning to something familiar while they processed all of the recent events.

They had fished all night and caught nothing. In the morning, a stranger on the shore encouraged them to drop their nets on the right side of the boat. They did, and ended up catching so many fish they could barely lift the nets!

Suddenly Peter knew. In an instant it all came flashing back. He remembered that night years ago when he was out fishing and caught nothing, and that he was called the next morning to follow a man who had miraculously filled his boat with fish (Luke 5:1-11). This wasn’t some stranger on the beach; it was the one who had called him! Peter jumped out in order to swim to his friend; he couldn’t wait for the boat to reach the shore.

I can’t get over how beautiful Peter’s leap was. He didn’t think about it (other than to put on his tunic… v. 7). He didn’t stop himself from speeding up the reunion like I did in the airport that day. His instinct was to get as close to Jesus as fast as possible, the end.

One of the many things I am reminded of from this story is that I want to love Jesus the way Peter did that morning so long ago. He could have been fixated on what he had done wrong, afraid to approach the one he had let down. Instead, Peter’s only thought was to get to the one who had changed his life.

Peter’s expression of love didn’t ignore what needed repairing between himself and Jesus. If we read the rest of the story, we see a beautiful picture of redemption and forgiveness as the two walked and talked together on the beach. Peter couldn't help but get to Jesus, even knowing restoration needed to take place. At its heart, his reaction is an example to us of what it looks like to love God in a way that can’t be contained. Let's ask ourselves: are we loving like Peter?