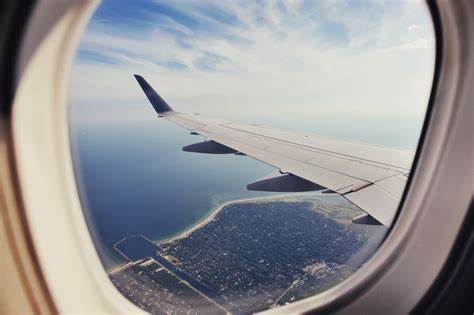 I recently experienced two very…interesting endings to trips that involved flying. In both situations, Matt and I found ourselves unexpectedly staying overnight in cities far from home. Once in an airport (that was a sleepless night for me), and once on a family member’s couch who happened to live near where we were stranded (for exactly two more days before moving hundreds of miles away - talk about good timing!).

I have a love-hate relationship with airports. I love looking around and seeing people from all over the world. I love hearing various languages being spoken. Even though it’s terrifying, I’ll admit it can be pretty breathtaking to look out of the window of a plane and see God’s handiwork from a whole new perspective. I love the chance encounters that can happen with people if you have your eyes and ears open.

I hate that I can’t sleep on planes no matter how long the flight is. I hate flying in general (humans are supposed to be on the ground, people…). I hate being surrounded by crowds and having people brush against me as they rush to their gate. I hate that the food is so expensive. Most of all, though, I hate seeing people being treated like dirt.

Our delays this year have both been weather-related. Seasoned flyers know this, but oftentimes airlines will not offer much, if anything, in the way of compensation if your travel plans get delayed due to weather.

Many others were in the same boat. As a result, we saw long customer service lines, heard endless rude comments and cursing, and witnessed aggressive body language. Angry people taking out their anger on the poor person who drew the short straw and found themselves behind the computer at the worst possible time - the end of the night when the chances of catching another flight before the sun rose again were pretty much non-existent.

Not everyone acted this way, but it was more frequent than I want to believe.

Why, then, do we sometimes think we have a pass to ignore these fundamentals of our faith when we are inconvenienced? When we don’t get our way? When we see an easy scapegoat in front of us (like a tired airline worker in the terminal)? Why do we let vicious blaming fly from our mouths and anger escape from our bodies?

You don’t have to step foot in an airport to learn from what we witnessed. Each of us will be inconvenienced today. And tomorrow. And the day after that. Something won’t go our way. There will be someone around us on whom it will be easy to take out our anger. To place our grievances upon. To step on.

We must resist taking this cheap and damaging path. Instead, we can choose to take a deep breath, speak gently, and walk God’s narrow path that makes it impossible to cause such harm.

Even When Inconvenienced Jul 7th, 2021